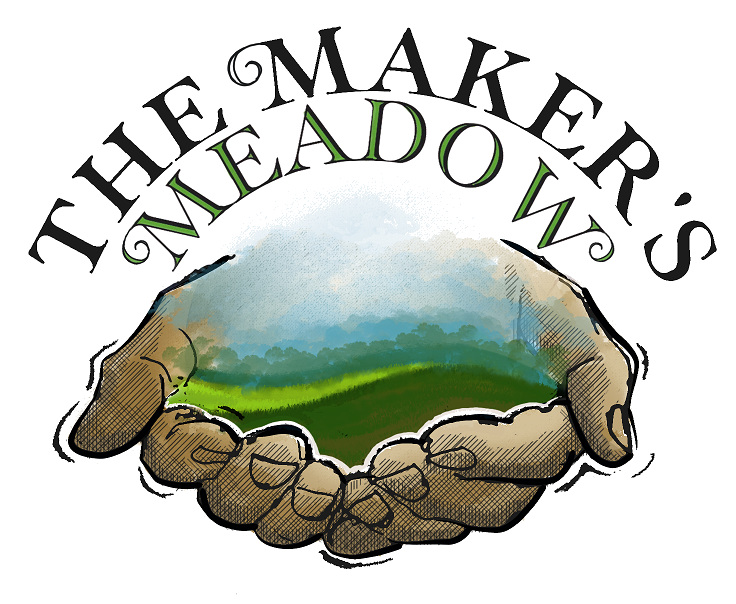 An interesting article from Joel Salatin

If all of us mentored by Allan Savory have learned one thing from him, it is that everything relates to everything. Of course he did not invent the concept, but he has certainly popularized its practical application to our daily lives.

In May John Tyson, CEO and legacy family member of Tyson Foods looked into a CNN camera and said the unthinkable: “our food system is broken.”  At the time, large broiler operations were foaming birds (suffocating whole houses of chickens with a soap-like foam), dairy farmers were dumping milk, and pig farmers were euthanizing ready-to-slaughter hogs because mega-scale processors couldn’t stay operational.

Writing anything about the Coronavirus is risky because the context (another of Allan Savory’s favorite words) changes by the hour. I’ll stay away from issuing any prophecies. But the glitch in the meat industry and on supermarket meat counters, if it’s not ongoing by the time this gets to print, has certainly wreaked havoc this spring.

As grass farmers, we must be careful not to fall into the single issue efficiency trap that caught the industrial livestock sector.  We are not separate from all the other components of the food system. People want T-bones; they don’t want a thousand-pound steer running through their kitchen.  Somehow we must get our animals dead, diced and distributed.  Resiliency actually is as important as efficiency. And Dave Pratt of Ranching for Profit fame would tell us wisely that effectiveness is even more important than efficiency.

As much as we love grass farming and spend lots of words talking about this subject, we are only one piece of a puzzle. The producer is not more important than the processor.  We like to think we are since we start everything and grow it from infancy, but in the end, we’re just the first link in a long chain.  We are only as strong as the rest of the chain. In order for us to be effective and resilient, the whole chain needs to function properly.

That’s what Savory would call “everything is connected to everything else.” Rightly so.  As we all witnessed what led John Tyson to utter his infamous critique, we came to grips with a painful reality:  we’re dependent on processing and distribution.  As wonderful  as grass farming is, it’s not isolated from all the other components of the food chain.

With that in mind, it’s worth using this wake-up call to re-examine the post-farm part of our pastured animals. For months, the only places in the USA where thousands of people worked shoulder-to-hip every day was in these large processing facilities.  Their magnitude is mind-boggling.  With restaurants, theaters, stadiums, convention halls, office complexes, and amusement parks shut down, these mega-processing facilities were the only large congregation places left.

But think about other aspects in this efficiency-only model.  The plants are cool and damp with lots of dark corners.  Early on the officials said sunlight is one of the best defenses against Covid19. No sunlight filters into these plants.  Further, most of the workers carry some sort of stress.  Many are living in a foreign land, eating strange food, and living 20 to a normal 4 person house to save enough money to bring more family members to the USA.  They eat cheap food to scrimp on costs; they’re trying to get a foothold in a new country, learn a new language, new culture, adapt to a new temperature (the Ethiopian workers at the Smithfield plant in South Dakota had a big climate change).  This is not xenophobic; it’s reality.

It is only reasonable that these environments would be a significant vector for spreadi;ng disease.Except for nursing homes, the pandemic has had a decidedly urban versus rural divide.  The lion's share of the rural flare-ups have centered around these massive processing facilities.

Teresa and I co-own a small 20 employee federal inspected abattoir in Harrisonburg, Virginia.  The differences in working environment  and labor force between our small facility and these 3,000-plus employee outfits is substantial.  Because we are not working assembly-line fashion, work stations are inherently spread farther apart.

We have a trio of guys on the kill floor but they aren’t on top of each other. One is at the kill chute: another is washing down a just-skinned carcass; another is skinning the next one.  The efficient and notorious chain doesn’t exist; the slower pace and craft elements inherently create a more spacious work environment.  In the cut room, large stainless steel tables offer each person a big work station.

One person operates the grinder; another operates the band saw; another carves boney piecest to collect trim for grinding.  Two people stuff cryovac packages and run that machine in another room.  These small community abattoirs are as different as night and day from the industrial-scale facilities stuffing closure and sickness.

If we assume that the public health officials are correct in pushing for distancing between people for protection, an obvious corollary of that principle is an abattoir that by definition spreads out workers and uses fewer crammed in one room. When Buckminister Fuller wrote the iconic Small is Beautiful, this is exactly the kind of ting he talked about. The efficiency experts laughed him to scorn and did everything in their power to make him irrelevant.

Until one day John Tyson looked into the camera and said ‘our food system is broken.”  To get the full import of this statement, remember that Tyson and his fellow industrialtitans have been declaring their superiority over inefficient small processing facilities for years.  For him to admit that his model is flawed is akin to a Baptist minister saying a sprinkle will do.

The system got jolted.  What to do about it?  I remember 20 years ago after a space of food borne pathogens congress commissioned the General Accounting Office (GAO) to study the problem.  The bi-partisan report came back with four primary risk factors in the American food system:

What would be the opposite of these four high risk factors?


It doesn’t take a rocket scientist to figure this out, yet government policy continued to encourage the high risk trajectory rather than the lower risk.  Which leads to where we are today.

Just imagine if rather than 100 mega-processing facilities supplying the nations meat and poultry, we had instead 200,000 20-50 person plants scattered (spread out? distanced?) all over the country servicing their regions.  White Oak Pastures has made quite a name for its brand by bringing processing onto the farm.  Kudos to them.  We need more; lots more.

I wish we had another 100,000. As innovative as grass farmers are, perhaps this is the next big innovation.  As we collaborate and do everything different than the orthodox production models,the next permutation is to do everything different on up the food chain.  The security we’ve built into our production model by using perennials,low-capital infrastructure, and knowledge-dense skill now needs the next step.

What good does it do to be resilient in only one piece of the chain but remain completely vulnerable in the rest?  Grass farmers selling branded product direct to consumers are largely building this neighborhood-scaled food chain.  Mobile processing units primarily for poultry and small-scale abattoirs are as important for our long-term food security as the principles we espouse out on our grass farms.

One specific and practical step to facilitate this small-scale expansion is Kentucky congressman Thomas Massie’s Prime Act bill, which has foundered around in Congress for five years but has suddenly received new attention and many new co-sponsors since Coronavirus food fears.  It would allow meat (beef and pork) to enter commerce from custom facilities, outside of inspection.

Instead of requiring our “Not for Sale” freezer beef customers to buy a quarter or half, we could legally sell a pound of ground or a single t-bone to a neighbor.  The bill only allows intrastate sales, not interstate sales.  Many, many custom abattoirs that served their communities faithfully for decades have closed up due to onerous regulations and changing consumer buying trends (smaller quantities and nobody has a freezer). Massie says many of these plant owners assure him that if the Prime Act passes they’ll immediately re-open their community facilities.

Why should the only people who enjoy pricing discounts available through “Not for Sale” loopholes be the ones who can afford a large volume purchase and the frozen storage capacity?  People who want smaller volumes with smaller storage should be able to tap into the lower price as well.  The lower price is due to reduced paperwork and infrastructure overheads mandated by inspection.

To tell a neighbor the only way she can buy affordable beef is to get it by the quarter is highly prejudicial and discriminatory. What she needs is food and the government should step out of the way and let her get it. A call to a congressman to support this bill is a call to more decentralization within the system.  That, in turn, is a step toward security and resilience. At this point in our grass farming movement, the weak link is not knowledge; it’s having more and nearby abattoir options.  We now know that it’s a vital part of our nation’s food security.

Joel Salatin is a full-time grass farmer in Swoope Virginia, whose family owns Polyface Farm. Author and conference speaker, he promotes food and farming systems that heal the land while developing profitable farms.  Follow his blog musings at www.thelunaticfarmer.com  To contact him, email polyfacefarms@gmail.com orcall Polyface Farm a 540-885-3590.

A note from John’s mom:

You see the quote around that is so good, “Know Your Farmer.”  Well I feel especially privileged to not only “know” my farmer but to have “raised” him as well!

Years ago, when John was a baby in my arms, we took him to a meeting where Joel was the main speaker.  John has continued to learn from Joel over the years. John was interested in farming for as long as I can remember. A subscription to the The Stockman Grass Farmer was a birthday present for him starting probably about age 10. The way I remember it, John raised his first chickens to sell when he was 8 years old.

If you enjoy reading I would encourage you to find Joel’s books and read them. They are very entertaining as well as educational!  They may also stretch your vocabulary! I retyped this article for John to use in his email. There was more than one word that spell check didn’t recognize. I usually read his books with a dictionary nearby because i like to learn new words. But he uses enough words that you can figure out what he means from the context if you are not a dictionary fan.

John, I want to publicly voice my appreciation to you for all the years you have helped our family have healthy meat to eat. Thank you!  I am so blessed to have you as my son.

Beauty on the farm 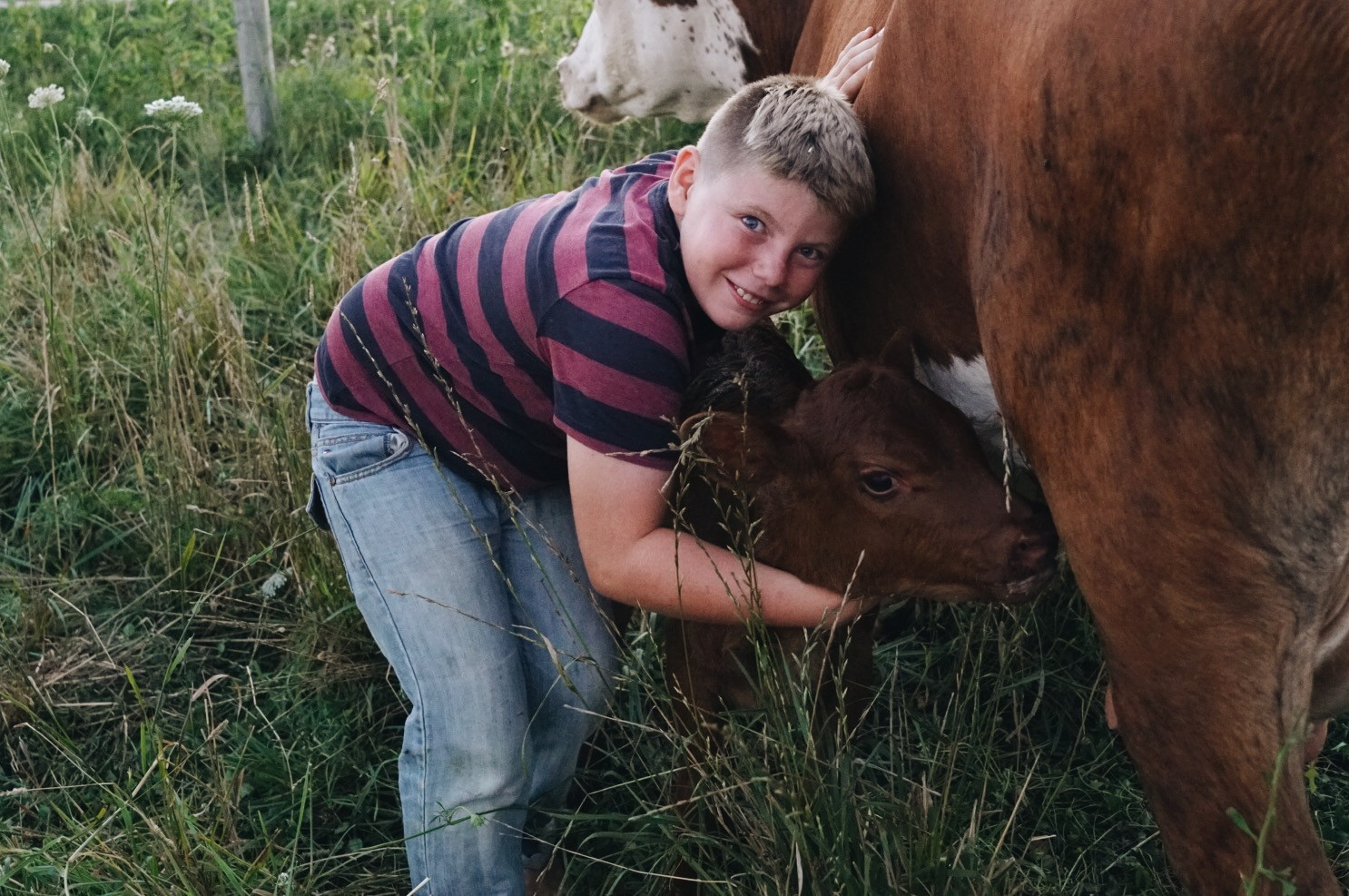 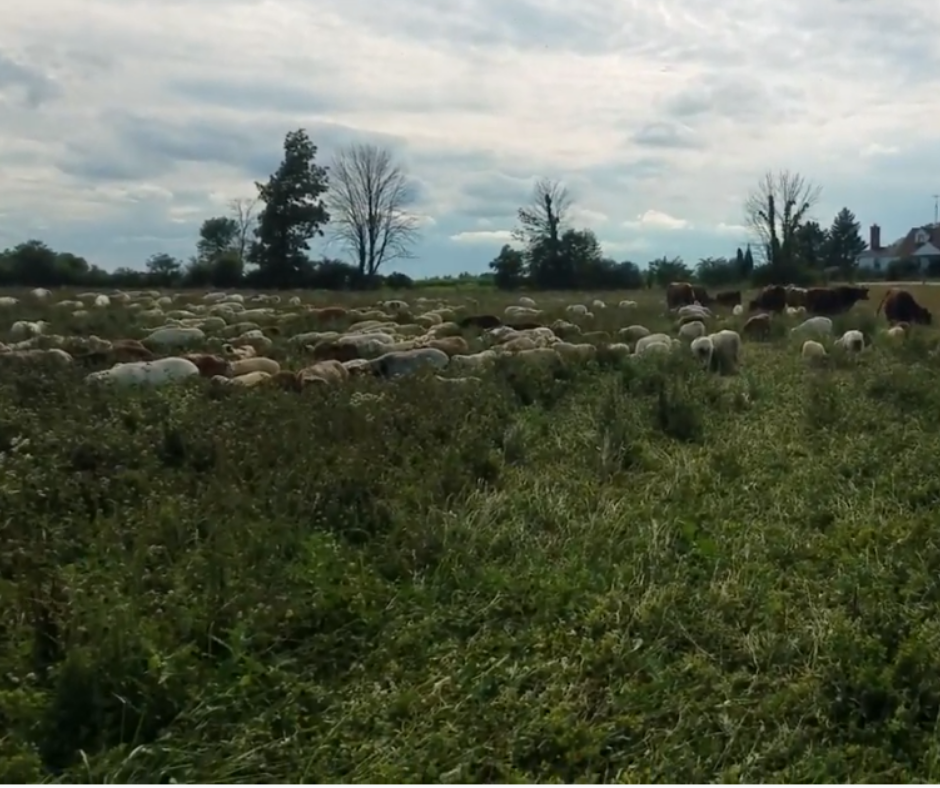 Getting Chickens Back From The Butcher 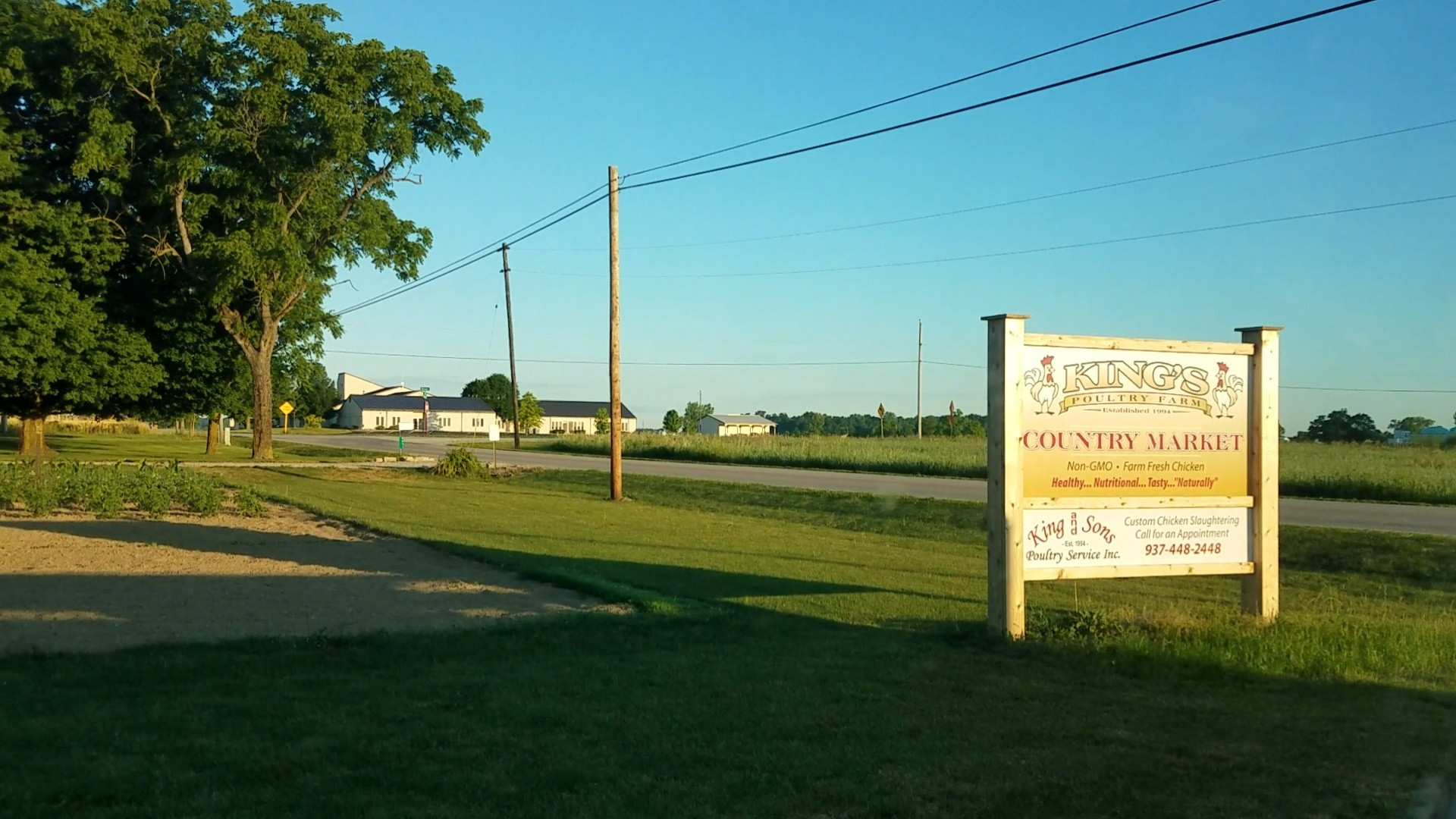